For a long time we've thought it would be good to show why a full function articulator is a necessary piece of equipment and this month, with help from Panadent, we have two animations that will help you further distinguish yourself from other dentists.

We are also issuing another software update as we have updated the software in the installer you download as a new customer or if you download the latest from the Members Area. Details of why we have done this are given below.

If you use a face bow to determine the position of the condylar axis, or if you take impressions of your patients' teeth so that you can study their bite before making changes in their mouth, you may well be doing things your patients have never experienced from another dentist.

In the first of this month's animations we give you a tool to explain why you are taking those records and how you will use them. 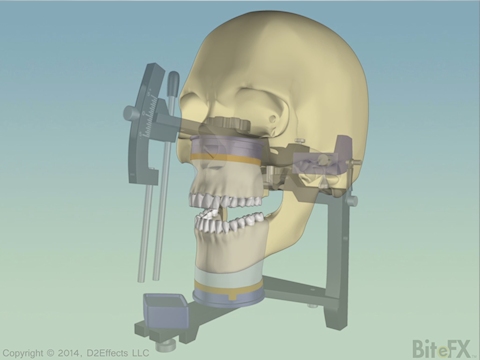 The second of this month's update animations includes all of the first animation but extends it by adding the motion of a simple hinge articulator. The animation shows both full and hinge articulators working in a side view, and draws the arcs followed by front and back teeth in each. 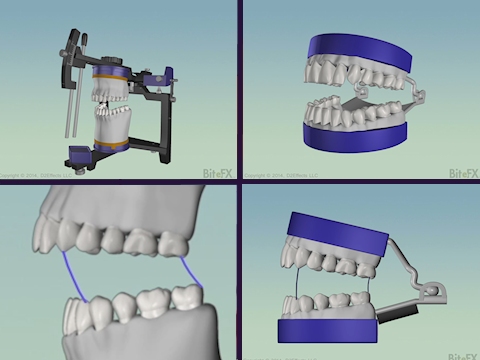 This is an excellent tool for helping patients understand why you are different from the average dentist and why your treatment recommendations work well for your patients.

Thank you Tom Lee, President of Panadent, for help in creating the animation models of the articulator and to Dr. Milos Boskovic for reviewing the animations and suggesting suitable enhancements.

We have put these two animations in a new group called "Diagnostics" and moved the Leaf Gauge animation to this group. The "Leaf Guage + Equilibration" animation stays in the "Treatments" animation group.

Some of the fixes we issued last month in BiteFX software version 2.0.3.32 avoid problems that some people were encountering when installing BiteFX. We therefore decided to create a new installer file (the .msi file that you download to install BiteFX). That takes a little longer to build and test so by the time we were ready to make the update we had found and fixed a few other minor issues. We have therefore updated our installer with BiteFX version 2.0.3.38 so are issuing BiteFX 2.0.3.38 as Update 28 this month. That way whether you use the new installer (followed by updates) or started with one of the previous installers and applied all the updates, you will end up with the same software, animations and photos.

Here is a list of the fixes included in this software update:

Note: The 2.0.3.38 installer is NOT a roll-up build. It uses the latest version of the software but, after installing, updates 17 and following still need to be downloaded and installed to bring BiteFX fully up-to-date. We are working on some enhancements to be released in a few months' time and at that point we will produce a "roll-up" build that includes all the updates issued to that point.