This month's updates include one new animation, one animation fix, and one enhanced animation.

The contents of both the Windows and iPad updates are the same.

Update 0061 for Windows and Update 30 for iPad Contain:

This animation shows how, if one TMJ disc is displaced and recaptured on opening, the jaw can describe a sort of "S" shape when opening and closing.

Starting position of jaw and discs - disc on left is displaced 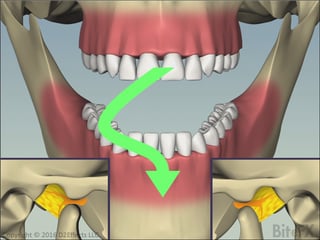 When disc is recaptured jaw returns to a more centered position, so it follows the path shown by the arrow

This animation was requested by Dr. Chris Chamberlain and was reviewed and refined by Dr. Alain Aubé and Dr. Rick Rogers. We are most grateful to each of these dentists for their contributions and help.

Dr. Chris Toomey pointed out a rather whopping error in this animation - the canines that are worn down in the first part of the animation suddenly reappear at full length in the latter part when it shows the effects on one of the molars. The update fixes this issue.

Thank you Dr. Toomey for pointing this out!

The updated version shows the final state long enough that viewers can register what it looks like even when the animation is on a continual loop. 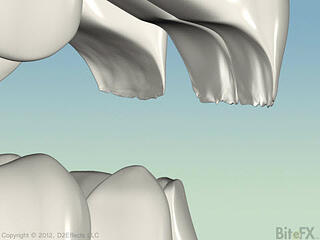